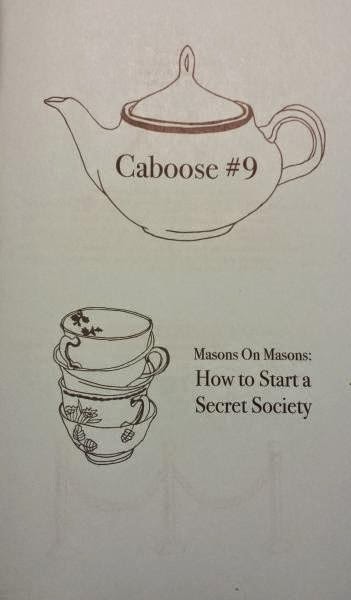 The most recent recent issue of my zine is available. It's Caboose #9: Masons On Masons, How to Start a Secret Society. You can order it here at quimbys.com for a mere $3. And here's a snippet from it at my website, if ya wanna a read a nibble from it.


My husband and I did a presentation on fraternal orders and forbidden knowledge, which then inspired this issue. But it wasn't just us doing some research on a topic we were already interested in and then writing it up. We used the pre-existing Freemason-influenced society structure as a template for making your own order. We looked at things like the OTO, Tongs, the Yakuza, the Knights Templar and more, to see what is effective and ineffective in terms of establishing your secret society, DIY-style. But lest you think it's just a brotherhood frat party, we spent some time thinking about things from a feminist angle too; we all know that "auxilary/supplemental" groups for the ladies who can't be invited to join really means "added later" which means "you can have your special boring separate but not equal tea party," which really means "oh yeah, we don't care about you because you're a woman." We also tied things in with some of our favorite mayhem topics like occult, steampunk, anarchistic philosophy, Crowley, Masonic goat humor (yes, it's a thing) and more. Of course there are some hilarious graphics, if I don't say so myself. Also, my dad is a Shriner master Mason and he showed me his fezzes.

Titles of pieces include: OG: Original Generative*The Order of the Pug*The First Rule of Rosicrucianism, Fight Club & The Catechism of a Revolutionary*The Illuminati: Really Just a Book Club* Name-Calling, Lawsuits and Personal Issues* Reaping the Benefits of Secret Societies: Financial Security, Self-Preservation & Philanthropy*Building Your Secret Society's Public & Private Spheres & Developing Pageantry*The Clockwork Universe, It's Overlap With Freemasonry & Steampunk Maker Culture: A DIY Manifesto*Considering Identity In the Formation of a Secret Society*Mirth & Mayhem: Activities In Your Meetings
Posted by Liz Mason at 5:06 AM No comments: Links to this post