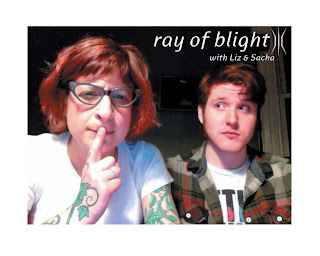 The first episode of the pop music podcast I do with Sacha Mullin called "Ray of Blight" is up!

Sacha and I are friends. Friends who talk about pop music. And we eat in as many as three or more diners in a night. And then we laugh ourselves silly. Won't you join us?

More info at rayofblight.podbean.com, including info about streaming/downloading it there or on I-Tunes.

Posted by Liz Mason at 12:43 AM No comments: Links to this post